Professional voice over for your video!

Professional voice over for your video! 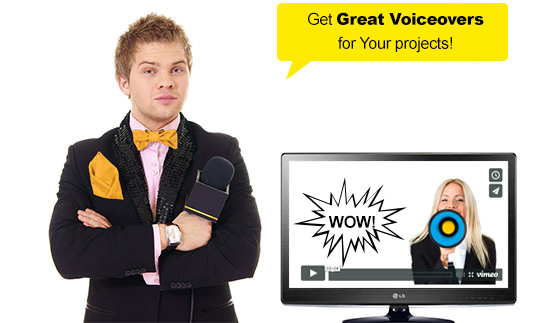 Why should you order a voiceover for your video with us? Here are four good reasons:

Watch samples of our voiceover recordings for video

Watch and find out what our end-product looks like. If you need more examples of fully edited voiceover recordings for video, ask us now!

Voice Over For Video

What do you think is more important for the viewer - the visual footage or the accompanying sound? It is impossible to answer this question unequivocally, because different people perceive information in different ways. Ideally, the video and the accompanying audio should harmoniously complement each other to create a holistic perception from watching the video.The audience will just not buy your video if the voice over is not attractive.

However, do not underestimate the impact of voice over in the world where media information is available in huge quantities. Here are just a few examples: films and TV series, YouTube videos, television programs, e-learning videos, social and corporate videos, animation, commercials, computer games and TV ads. After all, this is truly the widest scope!

Sometimes, the video voice over itself becomes an independent product, for example alternative translations of famous films by some creative recording studios.

You might already know that a "live" and bright video voice over will not only help you achieve your goal, but also make your video popular and recognizable, while a poor-quality voice over can ruin the viewing experience and spoil even the most interesting video.

Let's look at what types of voice over there are and what purposes they are best suited for.

Types of Video Voice Over

For ease of understanding, we have divided the available information into different types of voice over according to the same criteria

Description - Dubbing the lines of each actor in the frame. The lip sync technique is often used (Lip sync - synchronization with the lips of the speaker).

Specific features - The most complex and demanding type of video voice over when the dubbed lines should correspond as much as possible to those spoken in the frame. The original audio track is removed.

Creation "from scratch" - The voice actor must follow the lips of the dubbed actor. At the same time, professional acting is required from the voice talents – the viewer should have the impression that the actor speaks in the voice of the voice over artist. Only really skilled voice talents can dub videos well.

Localization / translation - The translation is performed in a special way so that the text matches as much as possible the original - both in terms of length and the words used.

Use - Feature films; in videos, when voice recording is created separately from video recording; in educational videos, when the recorded audio track is not suitable for online streaming.

Cost - The most expensive type of voice over, not all voice actors have enough skills to record it.

Specific features - No bright acting is required as in lip sync - we can hear the tone of the original and see how the person in the frame speaks. Small differences in the length of the lines with the original are allowed, the original audio track is muted, but it can be heard.

Localization / translation - The length of each translated line is important, but it is approximate, not as accurate as in lip sync. A more accurate translation of lines is required only in dialogs.

Cost - The average cost between lip sync and voiceover translation.

Description - The narration is conducted in the third person behind the scenes, the voice artist talking about the subject of the video.

Specific features - There is no binding to the character in the frame. The original audio track is muted.

Creation "from scratch" - If the audio track and video footage are not logically connected, voice recording is performed at a convenient pace for the voice actor. When it is necessary to voiceover the information displayed on the screen, it is important for the VT and sound engineer to monitor the synchronization of video and audio.

Cost - The cheapest relative to time-sync voice over and dubbing.

For voiceover of videos, it is optimal to use time coding – it is an approach when a script is prepared in away that the voice actor understands how and when to read a particular line. Timecoded script indicates the spoken text, the beginning and end of the line, its timing, the emotions with which it is pronounced, and other specific features that will help the VT to best record the required phrases. Timecoded script can go down to each word or sentence, or maybe an entire paragraphs of the text, depending on the selected type of voice over narration.

Small example of a timecoded script: